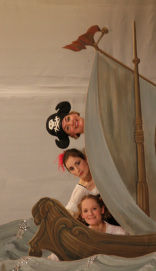 Ingela Lundh (Grandma´)
was born and raised in Stockholm and trained as an actress in London at East 15 Acting School between 1996 -1999. Since graduating she has worked as an actor and director in England, Italy, Denmark and Sweden. In England she worked with such groups as Oddsocks Productions and Forest Forge and her credits include Helena and Titania in A Midsummer Night’s Dream and Ophelia in Hamlet. In 2003 she returned to Sweden where she made her debut as Helena in Den första hösten at Elverket. She has continued to work in theatre and as a voice-over artist both in English and Swedish and gave the English voice to Mrs. Alving in Ingmar Bergman’s productions of ‘Ghosts’ in its guest performance at The Barbican Centre in London. Ingela is a founding member of SEST and performed the voice in 4.48 Psychosis, Anna in Boston Marriage, various roles in Tales from Ovid, Charmian, Helena, Richard III, Maria, Malvolio, Catherine, Lady Macbeth and Celia in Shakespeare In The Park- As We Like It, Anette in The God of Carnage and most recently The Manager in Contractions at Teater Brunnsgatan Fyra where she also co-directed Judith. In 2013 she directed the televised Nobel Prize Banquet Entertainment.

Karin Sandström Lapukins (dancer)
Graduated from the Royal Swedish Ballet School as classical dancer, trained in Spain, Madrid, France, Germany and New-York.
She has been free lancing in Sweden in many projects mainly and part of several of Bétina´s productions at Confidencen. She saved the performance of "Mormor Pirat" 2012 when former Svarta Malin got injured and learned the role in less than a week.


Technician Oscar Dellert.
Almost born in a theater (Confidencen), he started training ballet at the Royal Swedish Ballet School and continued with drama at Juliard School in USA. He is now working with the technical side of performances mainly at The Royal Court Theater - Confidencen but also The Opera house of Stockholm.

Bétina Marcolin (dancer, choreographer)
An international soloist carrier with The Royal Swedish Ballet gave her the opportunity to embrace a very large repertoire, with both cassical masterpieces and new works. She has worked with projects outside the Opera, performing in many festivals in Sweden and abroad.
She has been studio manager, has studied Medecine and has a diploma as coach. Since more than 20 years she is a dance researcher on her own basis. House Choreographer/Ballet Master at Confidencen.
Bétina´s motto is "quality with soul".
Her collaboration with Ingela Lundh started 2005 when Ingela staged the performance of Divertimenti Di Confidenza of Gunilla Roempke, and Bétina played the role Bétina written for her. In December 2013 she assisted Ingela with the Nobel Prize Gala.